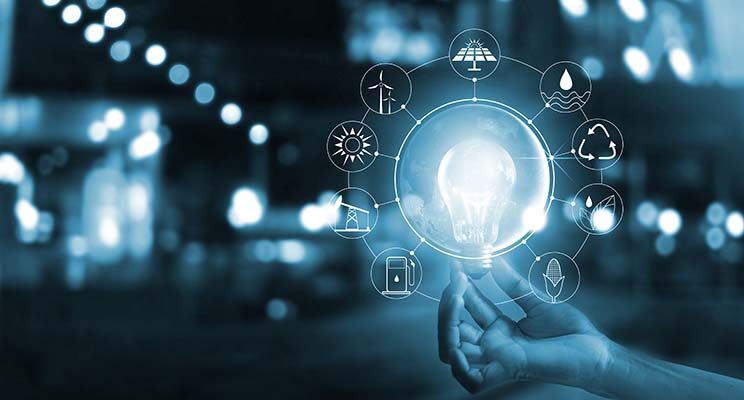 In recent weeks, headlines have been abuzz with massive increases in electricity and gas prices on wholesale markets. Gas prices have risen by around 250% since the beginning of the year, and before the onset of winter the price curve usually only knows one direction: further upwards. The situation is even more drastic in the electricity supply sector. Within a year, European wholesale electricity prices have risen from just under 4rp/kWh in October 2020 to over 20rp/kWh in October 2021, which is almost a six-fold increase. Although the very high prices in the short term will not be passed on directly to end customers on a one-to-one basis, initial price increases have been observed at individual energy suppliers. In the medium term, a further increase in energy prices for end consumers is very likely. Under these general conditions, many end consumers could once again increasingly consider the topic of generating their own electricity in order to become less dependent on wholesale prices in the future.

In order to be able to assess whether it makes sense for end consumers to generate their own electricity, we will first take a look at a few boundary conditions that can have a massive influence on the decision to generate one's own electricity:

Own power generation through PV
Probably the simplest and at the same time most sustainable form of generating one's own electricity is the generation of electricity from solar radiation energy by means of a PV system. It is now common knowledge that the generation of electricity by means of PV systems has made a quantum leap in the last 20 years. Pure module prices have fallen in price by a factor of 10 over the last twenty years. At the same time, the quality of the modules increased, which is reflected in increasingly longer performance guarantees from manufacturers of up to 30 years. Already in 2018, solar energy was identified as the cheapest source of electricity generation. Even in Central Europe, a rather unfavorable location for PV generation from a global perspective, PV systems produce electricity at well below 4rp/kWh in some cases.


Nevertheless, the decentralized generation of PV electricity on roof surfaces has not yet been able to gain widespread acceptance. The reasons for this include the high installation costs of small systems and the low self-consumption rates that can be achieved due to the lack of storage capacity. In the rooftop segment, production costs of 8 to 12 rp/kWh can be realistically assumed in Switzerland today under optimal conditions, depending on the size of the building. The production costs are largely dependent on the roof area to be covered with modules. Well aligned multi-family houses have an average cost of 8-10 rp/kWh. Roof areas on single-family houses tend to be in the range of 10-12rp/kWh.

An example calculation for an average single family home with a power purchase price of 21rp/kWh and a feed back tariff of 8rp/kWh results in a payback period of about 20 years. With a frequently calculated runtime of 20 years, the bottom line is that it can realistically only be called a hobby. But how will the profitability of PV systems develop in the future?

Current technical developments
However, with the development of e-mobility, the advancing large-scale use of heat pumps, and the development of inexpensive control software for self-consumption optimization, PV systems on rooftops could take on a completely different weight in the future. Driven by the electrification of the heat and mobility sectors, the electricity demand of an average household could increase from an average of 3,500 kWh for standard household electricity by 2,500kWh for the e-car (for a car with an average mileage of 12,500km/a) and 4,000kWh for the heat pump to 10,000 kWh or more per year. The increased consumption results on the one hand in a larger savings potential due to the cheap electricity from the own roof (10rp/kWh vs. 21rp/kWh) and on the other hand in a significantly higher share of own consumption.


More and more market players, such as car manufacturers, are working specifically to implement cross-sector self-power optimization at the local level. As a result, self-sufficiency rates of over 80% can already be achieved today. A self-sufficiency rate of 80% means that a household is 80% self-sufficient in electrical energy. Only 20% of the energy required over the year has to be purchased from the energy supplier. The e-car plays a central role in increasing the self-sufficiency rate. In the future, it can be used as a buffer store for excess PV electricity and, with bidirectional connection, feed it back into the grid to supply the household at night, for example.

Comparing this initial scenario with the previously calculated case results in a payback period of about 12 years for the same PV system. Tendentially increasing electricity purchase costs for grid electricity further improve the economic viability calculation. Another point that should be mentioned at this point: first long-term tests of PV systems reveal that today a potential lifetime of 30 years and more can well be assumed.

The economic viability of small PV systems will therefore in all likelihood continue to improve in the future. In addition, there is the political push to implement the Energy Strategy 2050, the core component of which is, among other things, the tripling of electricity generation from renewable energies by 2035.
Future scenario

So there are a number of factors in favor of decentralized power generation becoming increasingly attractive. So what happens if all these developments lead to the decentralized supply of electricity to private households and businesses becoming established on a large scale in the long term? What challenges await the energy supplier? To answer these questions, let's set up the following fictitious future scenario:

All existing end customers supply 90% of their energy themselves over the course of the year, for example by combining PV generation and battery storage. The utility only supplies the 10% residual electricity. A large proportion of the buildings are heated with heat pumps and individual passenger transport is largely provided by electric vehicles.

© Our World in Data
Global average price of photovoltaic (PV) modules
Challenges for utilities
Challenge 1: Change in the supply business
Despite the overall increase in electricity consumption, the effective supply of energy by the utility to end users is decreasing. Under the above premise, the sale of energy to end users is only a fraction compared to today.

At the same time, peak loads are expected to increase. These are typically caused by the comparatively high power for charging e-cars, as well as the operation of heat pumps. It can be assumed that these load peaks will occur primarily in the evening hours of the winter months. In order to be able to manage these load peaks, additional effort must be expended by the network operator.

With the additional effort, the costs for the provision of the network also increase. Since the costs for the grid are allocated to fewer and fewer kWh of electricity sales under the current pricing model, there is a significant increase in the grid charges per kWh. This in turn increases the incentive for decentralized self-supply. At this point, at the latest, the issue of fairness comes into play. In any case, the distribution of network charges is not (or no longer) fair.

Even if the scenario outlined will not become reality overnight, it is intended to show how the tasks of the utility will tend to change. The core business, supply, could become significantly less attractive. Customers' requirements and expectations of the energy supplier will increase. At the same time, the effort required to ensure system security will increase as decentralization progresses.

The level of granularity at which control commands are implemented decreases from a few large assets to thousands of distributed flexibilities. Another open question is how much responsibility the decentralized players in this system will have to bear themselves in the future.

In any case, the path from full supplier to organizer of a small-scale and flexible supply construct represents a technical, economic as well as organizational challenge. To meet these challenges, there should at least be no limits to the creativity of the energy supplier.
Read more
The death of the combustion engine
The consensus is that e-cars are the future of individual transportation. However, many people are not aware of how quickly this development can take place and what effects it will have. A daring look into the future.

Utilities
n recent years, utilities have begun to optimize their business processes, diversify their revenue base and seek new service areas. The transformation is well underway.

This Eraneos blog article discusses why the path of a zero CO2 society is considered inevitable and why we should integrate this aspect into our daily thinking and actions as soon as possible.

Current events
We are happy to welcome you to our events and discuss with you selected issues on current topics.